Soybean rust has been detected on the PANNAR research station in Greytown (28.02.2017) in a sentinel plot planted for early warning purposes. This is perhaps two weeks later than the norm for Greytown, but we have had a reasonably dry summer before the last week of good rains. These rains have been widespread, so it is likely that all the soybean growing areas that usually get soybean rust during the season will now be at risk. For disease to occur, you need all components of the ‘disease triangle’ to be present: disease inoculum; a susceptible host; the right environmental conditions.
We have established that the disease inoculum is present in the form of urediniospores. Whilst we know that soybean rust spores cannot over-winter in the area, we suspect that the spores blow in every year from a coastal frost-free region where the disease must survive on one of the many alternative hosts. The spores are highly mobile in the air, so it is likely that they have reached, or will reach almost all soybean production areas.

The mere presence of spores in an area is not enough to cause an epidemic. The right environmental conditions are required for the spores to infect a crop. The recent rains have provided suitable conditions for infection in Greytown, but these rains were very widespread, so it is likely that many areas around the country would also have favourable conditions for infection right now. In the past, the disease epidemics have started in the eastern parts of the country and progressed westward. It could be attributed to the direction of spore movement, but perhaps also to the fact that environmental conditions for soybean rust development are best in the East and get progressively less favourable as the rainfall diminishes in a westerly direction. The last part of the disease triangle that is required before a disease epidemic can occur is the presence of a susceptible crop host. From experience we know that all our soybean cultivars are vulnerable and that the soybean crop is most susceptible after flowering.

Rust can cause severe yield losses under favorable conditions (30-60%), so it is important that it is controlled. Rust control is primarily a preventative action, as the registered fungicides have little or no curative effect. There is occasional benefit to be had by spraying fungicides on soybean crops in the absence of rust, which makes controlling even light rust infections (in the order of 5% yield loss) financially viable. If you are in an area that normally gets soybean rust, this is an ALERT for you to spray your crop soon after flowering with a registered fungicide, before rust symptoms develop. 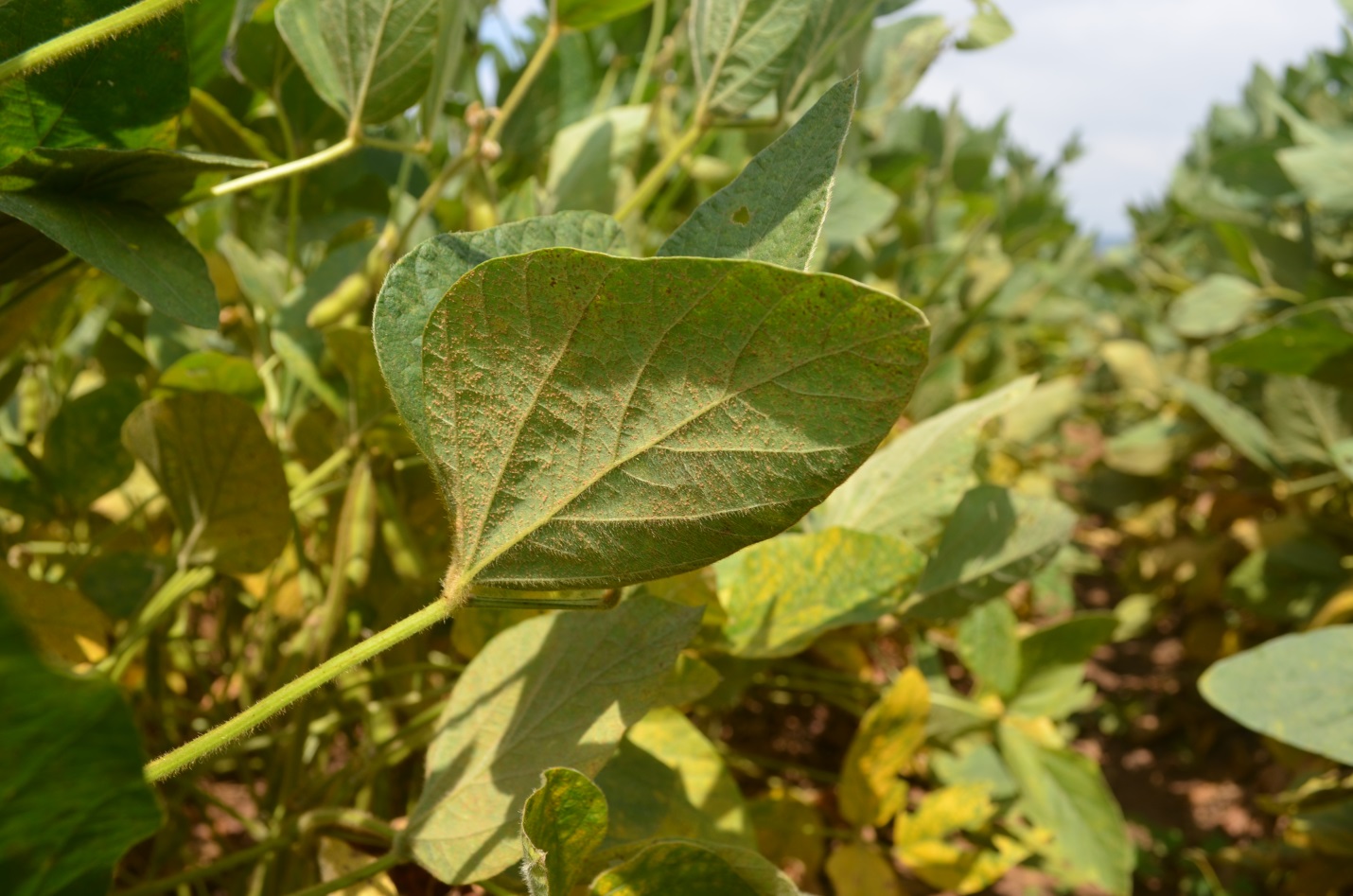 Sporulating rust pustules on the underside of the soybean leaf. Pustules generally develop first on the lower leaves where the micro-climate within the crop canopy is most favorable, but will progress up the entire plant causing loss of leaf area resulting in yield loss if not controlled.