There is more to a maize field than meets the eye. This is a production unit with thousands of efficient "factories" per hectare that produce energy through photosynthesis. The raw materials for the factories (plants) are water and mineral nutrients from the soil and carbon dioxide and oxygen from the atmosphere. The plants use sunlight as an energy source to produce carbohydrates, protein and oil that are stored as grain. The development and yield of maize is a function of the plant's genetic potential and the environmental conditions under which the plant is grown. The maize plant is largely dependent on nature for its growth, development and yield. However, the farmer can manipulate the environment through management of aspects such as hybrid choice, tillage, crop rotation, fertilisation, irrigation and pest control. A farmer who understands the growth and development of maize will apply the right production practice at the right time to achieve higher yields and profits.

This article explains the critical growth and development stages that are necessary for optimum growth and production.

Identifying the most important development stages:

The leaf stage is identified by the top leaf that has a visible collar. At about the V6 stage the lower leaves tear away from the stem due to its thickening and growth. To determine the leaf stage after about ten leaf stage, add five to the number of leaves that have visible collars because the first five leaves usually disappear by then. To accurately determine the correct V stage the lower stem can be cut longitudinally. The first four nodes are stacked on top of each other in the lowermost section of the stem. The fifth node, located above the first elongated internode, represents the fifth leaf and serves as a reference point to determine the growth stage. Leaf stages are especially important when certain chemical sprays that are linked to specific leaf stages are necessary.

Each specific V or R stage is defined when about 50% or more of the plants are in the relevant stage. Although each stage of development is important, we focus on the management guidelines for the VE, V3, V5, V12, V18, R1 and R2 - R6 growth stages.

A uniform plant population is the first step towards optimising the yield potential. Cool temperatures during planting generally limit the absorption of nutrients from the soil and are responsible for slow development. Band placed fertiliser plays an important role at this stage. The primary root absorbs the fertiliser and gives the "pop-up" effect needed for a strong seedling. Soil temperatures higher than 15°C are favourable for uniform and quick germination if sufficient moisture is available. Seedlings that take a long time to emerge can also lead to an increased risk of developing head and tassel smut, because the pathogen penetrates the plant through the coleoptile while it is emerging through the soil. The fungus grows just behind the growth point of the maize plant and is only expressed in the cob and in the tassel tissue during flowering. The longer it takes for the plant to come up, the greater the chance of the fungus establishing within the plant.

Herbicide damage is linked to cold wet conditions. Herbicides are absorbed by the coleoptile of the maize plant. The longer it takes the plant to appear above ground, the greater the risk of damage.

Hail, wind or frost damage at this stage has little or no effect on either the growth point while it is underground or the final yield. It can however delay the growth period by a few days. Water logging while the growth point is still below ground, especially when associated with high temperatures, can kill plants and lead to significant stand loss.

Weed control reduces competition with weeds for available light, water and nutrients. Weeds at an early stage are devastating and can cause significant yield loss. Good weed control in the early development stages of the maize plant is one of the building blocks of success. The use of chemicals, mechanical weed control and management practices such as higher plant densities or crop rotation or combinations of these are beneficial for good weed control. Mechanical weed control too deep or too close to the plant after the V2 stage can damage the root system. Be careful when doing any post-emergence tillage.

The growth point and developing tassel are close to the soil surface and the stem quickly begins to lengthen. A new leaf appears roughly every three days. The yield potential and the number of kernel rows per cob is determined. Each internode will develop a cob, although only the top one or two cobs will usually produce the harvest. Avoid any nutritional deficiencies. Top dressing with nitrogen should take place at this stage and should preferably be completed before the eight leaf stage. Be careful to avoid root damage if the fertiliser is placed in the soil. Scout the lands for any insect damage.

Fungal diseases on the leaves can reduce the capacity of photosynthesis, negatively affecting the yield potential, standability and grain quality. The V5 stage is a good time to start preventative fungicide spraying if foliar diseases are usually a problem in the area. Fungicides usually provide protection for 14 to 21 days. Use the right fungicide combinations for best results. Good disease control is also beneficial for standability.

Damage caused by hail, wind and leaf-feeding insects can reduce the number of rows on the cob. Frost at this stage can cause 100% damage. Defoliation by hail can cause yield losses of 10-20%.

The plant is in a phase of rapid growth and a new leaf appears about every two days and brace roots begin to form. Although the potential cobs and tassel form during the V5 stage, the potential number of kernels per row on each cob (cob length) is determined at the V12 stage.

The maize plant’s nitrogen need is highest during the rapid vegetative development. Avoid any water and nutrient shortages to ensure the maximum kernels and cob size develop. The number of kernels and cob size depend on the time requirements of the genetics involved. An early hybrid progresses through these stages quicker and tends to produce smaller cobs. One of the reasons for planting early hybrids at higher plant populations is to compensate for these smaller cobs. Avoid spraying fungicide during the V10 - V14 growth stage due to the risk of impaired cob development or Arrested Ear Syndrome.

If leaves are already wilted in the morning due to moisture stress, yield losses of up to 3% per day can occur. If hail destroys all the leaves, losses of 40-60% can occur. The loss is usually greater in quicker growing season hybrids than longer ones. In the case of 50% leaf loss 20-30% yield loss can occur.

At this stage the roots have developed to a depth of 1.8 m, if soil depth allows. The cob becomes visible in the leaf collar now. The plant is now about a week away from silk emergence and is developing quickly. Stress at this stage will delay the cob development more than it will delay tassel development, resulting in pollen being produced before the silks even emerge. Severe stress conditions can be very detrimental to the crop. If leaves are already wilted in the morning due to moisture stress, crop losses of up to 4% per day can be experienced. Prolific hybrids are usually more stable under stress because cob development is less restricted than single-cobbing hybrids under the same conditions. If the plant is defoliated by hail yield losses can run as high as 100%.

The reproductive stage starts as soon as the silk appears. Pollination takes place over a 5 to 10 day period. It is critical to maintain optimal conditions if possible. The ovules are fertilised during pollination and it is important to ensure that the number of potential kernels (ovules) actually develop into kernels.

Maize is sensitive to stress during this period. Stress can cause abortion of the kernels at the tip of the cob. If leaves are already wilted in the morning due to moisture stress, crop losses of up to 7% per day can be experienced. If the plant is defoliated by hail, yield loss can amount to 100%. Foliar diseases can also destroy the maize factory and cause similar yield losses.

Potassium uptake by the plant is almost complete by this stage. Potassium plays an important role in pollination and grain filling. If shortages occur, silk emergence can slow down and even contribute to unfilled and shrunken kernels at the tip of the cob. Low levels of potassium and excessive nitrogen can contribute to lodging problems. Nitrogen and phosphorus absorption is still rapid. The maize begins to translocate nutrients from other parts of the plant to the cob. Leaf analyses and nutrient concentrations in the plant at this stage are well correlated with the final grain yield and efficiency of the fertilisation programme followed.

The plant is now about to start storing carbohydrates in the endosperm and the period begins where dry matter quickly accumulates in the kernels. Worm or hail damage to the cob can lead to a secondary infection of Fusarium or other fungi.

These are the stages of active grain filling. The plant is now in its final critical stage and channels carbohydrates to the cob. Plants that developed well during the vegetative stage, but experience stress during grain filling are more likely to be infected by stem and root rot.

Stress during this stage can reduce the number, size and weight of the harvestable kernels. This stage of kernel development is directly linked to the potential damage that could be experienced if stress occurred. Try to protect the factory and keep it green for as long as possible. This will ensure that the plant spends as long as possible in each reproductive stage to maximise dry matter accumulation. It is especially important to protect the leaves against disease. The grain is physiologically mature when a black layer forms at the base of the kernels. This coincides with when about 80% of the bract leaves turned brown. Stress during this period can cause kernels to mature prematurely, which is unfavourable for the grain size and kernel weight.

Under irrigation, the last application can be made when 80% of the bract or cob husk leaves have turned brown. The moisture content in the grain is about 35%. The drying off period is determined by the hybrid, grain type and humidity of the environment. Diplodia ear rot can enter through the cob during grain filling or after physiological maturity if conditions for this are favourable.

Good moisture, nutrient and disease management are factors that can protect the yield potential.

Above: A maize seedling at the V4 growth stage 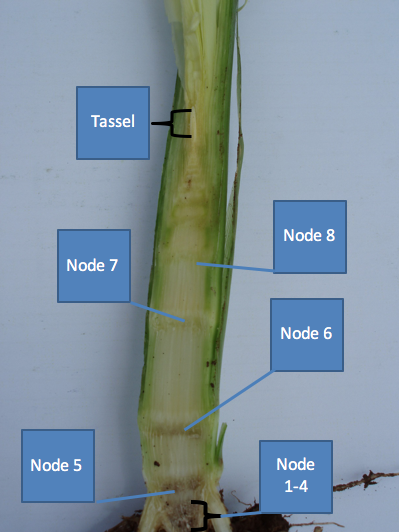 Above: Cross-section of a maize plant at V9 growth stage.