Maize How to Achieve Optimal Maize Production14 May 2019

Maize growers often have questions on to how to maximise their crop yield and the profitability of their enterprises. Grant Pringle, a product agronomist at PANNAR SEED, gives expert, practical answers to some of the more common queries. Lloyd Phillips reports.

Both experienced and new maize farmers experience uncertainty about key aspects of managing maize hybrids. Even veteran farmers would be wise to review the basic principles of maize production from time to time, as well as learn about the latest developments. Germination and emergence in maize, especially in areas of South Africa with milder climates, are affected by three interlinked factors and their characteristics. The first is the physical environment, which comprises characteristics including temperature, crop residue, soil compaction and water. The second is the genetics of the maize hybrids, and their characteristics, which include growth vigour and tolerance to stress. The third factor is seed quality, which comprises factors such as the seeds' moisture level at harvesting, and the processes of post harvest drying and conditioning. "Looking at maize seed genetics, some hybrids can better tolerate cold stress at emergence than others," says Grant Pringle, a product agronomist at PANNAR SEED. "It's the responsibility of seed companies and their sales representatives to give recommendations to farmers on which maize hybrids are best suited to the temperature challenges of particular areas."

Seed quality is strongly influenced by its moisture content at harvesting. Importantly, however, the appropriate moisture level at this point depends on the specific maize hybrid involved. Seed quality is also affected by subsequent drying and conditioning processes before sale. If the seed company ensures that drying and conditioning is done correctly and stores the seed properly after harvesting, it can retain its quality and vigour for up to five years. "The age of the seed after it is harvested and processed is not necessarily indicative of its current quality and vigour. However, should a farmer be wary of the age or vigour of the hybrid maize seed, he she can send a sample of the seed to a laboratory for a germination test to determine its quality and vigour," says Pringle.

A critical environmental factor influencing the even germination and emergence of hybrid maize seed is soil temperature at planting. Pringle warns that planting should not be carried out if the average daily soil temperature is below 14°C, as this will not only delay emergence, but also expose the seed to additional challenges. As an example, he cites the results of a trial which found that the final stand of hybrid maize seed planted at an average soil temperature of below 14°C contained nearly 20% fewer plants than that of similar seed planted in an average soil temperature of 14°C and above. Average daily soil temperature can be calculated by taking the temperature at the planned planting depth at 6am and 6pm on the same day, adding these readings together, and then dividing by two. With the ancestor of modern maize having first been domesticated in the warm climate of Mexico approximately 7 000 years ago, many of the latest maize hybrids still prefer a relatively high average soil temperature for optimal germination. In fact, 30°C remains the ideal for fast root and shoot growth, and if this is the average temperature during the spring planting period, the crop would have sufficient time to grow, mature and dry off. However, according to Pringle, few maize growing areas in South Africa achieve this high average. Optimal germination begins declining on either side of 30°C. "There's a planting delay in areas of no till maize production where seed is planted into residues of previous commercial and cover crops. While these residues help conserve soil moisture and improve soil organic matter, they also keep soil temperatures cooler than uncovered soil. No till maize farmers should measure soil temperatures at intended planting depth under the residue. They should also pay attention to, and control, chewing pests such as cutworms that can be a problem in no till lands," explains Pringle. All maize farmers should avoid planting into cloddy seedbeds, as these will be prone to temperature and moisture fluctuations, possibly leading to uneven germination and emergence. The seedbed should be even, moist and friable. With soil moisture also being critical for maize germination, planting into moist soil is essential. Farmers of dryland maize should wait for sufficient rainfall before planting, while irrigated maize farmers should pre irrigate their soil before planting if insufficient rain has fallen by the planned planting date.

"Avoid planting into dry soil, which heats up faster and to a higher temperature than moist soil, and then irrigating the seeds with cold water soon thereafter," warns Pringle. "The sudden temperature change from hot to cold will shock the maize seeds and seedlings, causing immediate damage. This will either kill the young plants or they will remain damaged for the rest of their lives." Seeds that take up cold water suffer from imbibitional chilling injury. The risk of mortal or long lasting damage to these seeds germinating under cold conditions can be exacerbated by some pre emergent herbicides. Seeds planted in dry conditions and then treated with certain pre emergent herbicides irrigated into the soil could also be negatively affected. This is due to the seed lying dormant in the dry soil until the post planting irrigation water seeps down to planting depth. '

Pringle explains that maize farmers can take steps to avoid the negative effects of early season plantings on seed germination. These include the following:

For more information email Grant Pringle at grant.pringle@pannarco.za, or phone him on 071 678 1511. 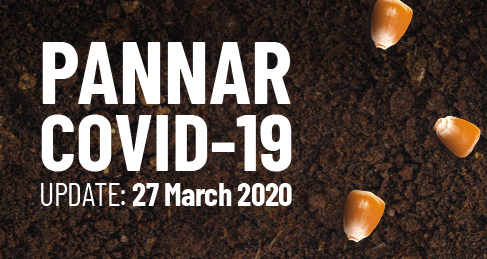 Agricultural and food supply related operations were listed among those that will continue to ensure... More >